I was posted to AAFCE in October 1957 to work in the RAF Support Unit as an Accounts Clerk. I recognized many old colleagues from that time, Mike Capon (MT) Gordon Lay and Keith Adams (Police) et al. I played soccer for the International XI eventually becoming captain. I was also a member of the Athletics team as a sprinter 100/200m and relay. I married Cpl. Mary Sell, who worked in the RAF Orderly Room, in the British Embassy in Paris in May 1960 (see picture) after which I was posted to RAF Locking for 4 years. My final year of his service was spent at RAF.Innsworth (Base Accounts Office) collating information for the computerization of all pay records. Whilst at Locking I attended evening classes at Western-Super-Mare Tech. College for Accountancy. On leaving the RAF in 1965 at the ripe old age of 27 I was employed as an Auditor by local Chartered Accountants (now Deloittes) in Gloucester continuing to study to pass the intermediate exam of the Chartered Certified Accountants and was involved in a variety of businesses and qualified as a Fellow of the Institute of Financial Accountants. Mary left the RAF shortly afterwards and after having our 3 children Mary qualified as a teacher of French/German teaching in various schools in Gloucester. Unfortunately she had a stroke in 2001, which left her paralysed down her right-hand side. I retired in 2004 and now live in Kingsway, Gloucester close to the 5 grandchildren. I still play soccer with my youngest grandson! They were great times and I am honored to have shared them with some great guys!! 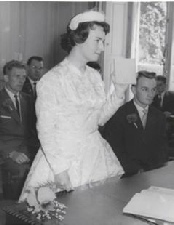