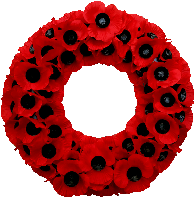 The image is of a wreath made by disabled ex-servicemen employed at the Lady Haig's Poppy Factory in Edinburgh.  The factory manufactures all items for the annual Scottish Poppy Appeal and also sells wreaths and other commemorative items to the public throughout the year.  To learn more about the factory or to purchase an item please click on the link below, ladyhaigspoppyfactory.org.uk

David was born on the 26th.October 1933 and after college joined the RAF where he served, among other places, in France at Allied Air Forces Central Europe Fontainebleau (AAFCE).

There he bunked with Ted Caton. In 1994 Ted contacted David (who Ted knew as Mole) after discovering a letter from him dated 1956’ This resulted in a reunion which led to the formation by David (nicknamed Danny for his apparent resemblance to Danny Kaye) of

David left the RAF and joined Cunard eventually becoming Finance Director. He met and married Jean who sadly passed away.

David became FVA Chairman and organised the now famous newsletters along with Annual week-end reunions and nostalgic visits to Fontainebleau and places of interest of bygone years.

Then married Christine an associate at Cunard. Christine was David’s “right hand” in the association. After his unfortunate accident Christine became his main career. But David still managed the running of the Group he set up until it became too much of a burden.

We of the association are grateful to David for bringing us together and for all his efforts in keeping us together. As our Dedication says “We have found old friends and made new ones”

Rest in Peace free from pain.