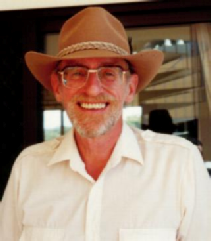 I was inflicted on AAFCE in April 1957. As a Clerk GD/Sec I was assigned to ACOS Training in Building 1. I was instrumental in founding the MPH Club co-organizing motor rallies and was editor of the monthly MPH Bulletin. Gendarmerie legend has it that I rode a Vincent motor cycle sometimes at 135 mph I completed my tour and saw out the rest of my 22 years service in the UK and Singapore as a Loadmaster on Beverleys and VC10s, and then joined the Civil Service (CS) in 1972.  Unable to adapt to the "twin set and pearls" mentality in the CS, I joined an American Shipping Company as Office Manager ~ excellent perks and typical US incentive schemes ~ e.g. "one mistake and you’re out." 5 years later I gave a sailor’s farewell and took a managerial appointment for Social Services in my native Scotland.

After holidays in Australia I and my wife Christine (an OH Nursing Sister with ICI) bought a 25 acre site on the Capricorn Coast in Queensland and had a house to my own design. I took early retirement, golden handshakes and everything in my office that was not screwed down and ran away Down Under leaving our (adult!) kids behind. We are now happy moldering away, ten minutes from the prawn boat harbour and beaches to die for. I often lie in his pool of an evening gazing up at the stars and the Southern Cross, nibbling a tiger prawn and sipping a chilled Chardonnay thinking "whatever happened to that mad bunch of layabouts from my Fontainebleau days?" and comes over all maudlin and nostalgic and have to open another bottle to get over it.