I arrived in Fontainebleau in December 1951, after serving in Bremenhaven, Germany in November 1951. I then went to Sonthofen, Germany to begin my journey to Fontainebleau where I served as a General Clerk in the Organization and Manpower Department until August 1955 when I was discharged (honorably) from the service in September 1955.  Initially the Americans were billeted in the converted stables next to the Fencing School in Avon (about one half kilometer from the Chateau.)  Everyone worked in offices set up in the sub floors of the Chateau (Cour Henri IV), moving to Camp Guynemer when it opened in 1953.

After service in the US Air Force, John was employed by a Gas Utility Company for 38 plus years. He and his wife, (pictured) reside in McMurray, Pennsylvania. We are avid swimmers, swimming one mile daily, and are members of a health fitness club, Rolling Hills Country Club and are active in Antique Automobile Clubs.  We have a 1941 Buick Sport Coupe that we show at the various antique car shows during the summer. One more thing - we are Cancer survivors. 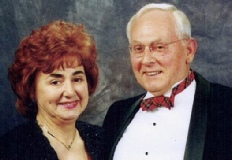