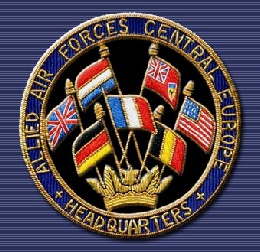 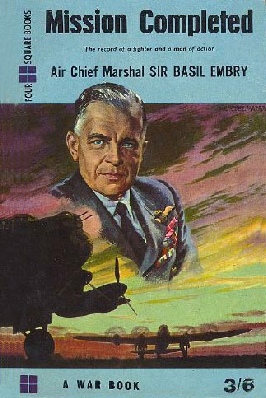 These web pages have been compiled via the research carried out by Les Hills, Brian Gibbons and Mike Capon.

As webmaster of the FVA website I thank these members for providing this historical look at this great man of our times.

Our friend & association member, Les Hills, recently remarried & emigrated to Oz, settling in Geraldton, Western Australia. While at Fontainebleau, Les was the Personal Steward to the then C in C, Sir Basil Embry. Les had often wondered how the Embrys had fared following Sir Basil’s retirement, & on embarking on a new life on the other side of the world, fate has enabled him to happily re-establish contact with the family.

His research, with help from Mike Capon & myself, led him to Boyup Brook , where the family had taken up sheep farming. Following a successful second career, & having served as Chairman & President of farming associations, Sir Basil died in 1977. The following is an extract from a long letter that Les sent recently……….

You will be very pleased that on the 27th. November, Bernadette & I went to Boyup Brook, about 80 miles south of Perth, to lay a wreath on the grave of ACM Sir Basil Embry on behalf of the FVA, please find a note of the words we wrote on the wreath. We also took some photographs for the website……………………Prior to going, we made contact by phone with Sir Basil’s son Mark & his grandson Paul, who has taken over his grandfather’s farm called “Ardua” about 18 miles from Boyup Brook…..We told Mark all about our association. He was most interested & gave permission to publish his address & email on our website.

………PS. When we spoke to Paul Embry he told us that “Nobby” Clark (Sir Basil’s driver) had called in at the farm a few weeks earlier.

Les & Bernadette are hoping to visit the Embrys again in February when attending a nearby Country Music Festival. Establishing the FVA’s link with the family of this popular, charismatic war hero could prove useful. Sir Basil had a long association with France having married in Paris in 1928, escaping from his German Army captors there during wartime & eventually becoming C in C Allied Air Forces Central Europe at Fontainebleau. A suggestion would be to have an article published in the RAFA magazine “Air Mail ” highlighting such a link with our association, as well as our continued involvement with France; Camp Guynemer; Quartier Chateau, & the Gendarmerie. Plus of course, mention of reunions, visits to France & parades at the Arc de Triomphe & Yevres. Access to a wider audience would certainly help raise our profile & bring in a few more members.

Many thanks for your efforts, Les ! Best Wishes to you & Bernadette from all your friends in the FVA. 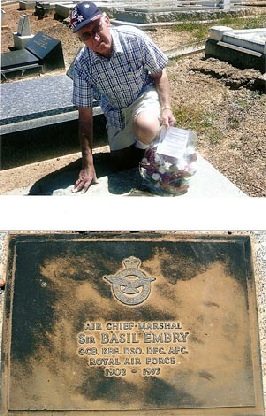