To anyone who was stationed at Camp Guynemer during the above dates I would like to hear from you, especially the whereabouts of Cpl Alan Sedden (MT) and his wife Barbara who had a flat above the bar on the corner of Rue St Honerie.

Returned to the UK January 1970

Posted to RAF Gayden for my last year left the RAF in 1971.

Entered civilian life in January 1971 after 12 years in the RAF was to be quite a shock to the system I had a wife and 2 children to care for in a new environment totally different to service life.

Once I had a house a permanent school for the children all I needed was a job I did a government Training Scheme in Carpentry for 6 months followed by various other jobs. Then in 1975 in a new direction I gained a position at Rolls Royce Coventry on the semi-skilled turbo blade manufacture milling work shop progressing up to skilled in various departments of milling, ECM, and EDM drilling until the closure in 1993. (Made redundant.)

Courses in IT at college then in 1997 I had the opportunity to have my job back at Rolls Royce Antsy till 2000. Once again I was bored and I took a job in stores for Land Rover Parts now in 2007 I am fully retired.

My son is the area manager of Coventry for Bailey Build base and my daughter is a qualified dental nurse working with the NHS children’s department.

Before joining the RAF which was a decision I have never regretted I was born in Hull I went to Newland Ave School and Lambert Street my decision to enter the RAF was whilst working for the local auctioneer Gilbert Bateson.I applied when I was 18 and volunteered for 3 years once in the service I received my calling up papers for nation service. It wasn’t until I was station at Cowden near Aldborough that I met my wife Maureen who accompanied me on all my postings except for Bahrain. (Our daughter was born in June 64 when we returned to the UK my son was born just before I went to Bahrain)

Over the past years we have re -visited Fontainebleau twice in 87/2001.and Singapore in 99/01. Now my wife and I are both retired and settled in Coventry nearing our 45th wedding anniversary this year 2007.

Finding your web site was pure accident whilst looking for something else and reading Flt Sgt Keith Adams record among others I read was for me a stroll down memory lane.

I am still in touch with a Mrs P Bartram whose husband was a Police Dog handler in the RAF for many years she now lives sadly on her own at Boscome Downe.

Would Joe Connelly remember a Cpl Alan Sedden who drove for AM Sir Morris Heath about the same time I have a photograph. Anybody at any of the station as me please contact (Email out dated!) 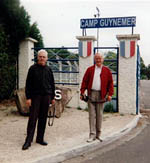